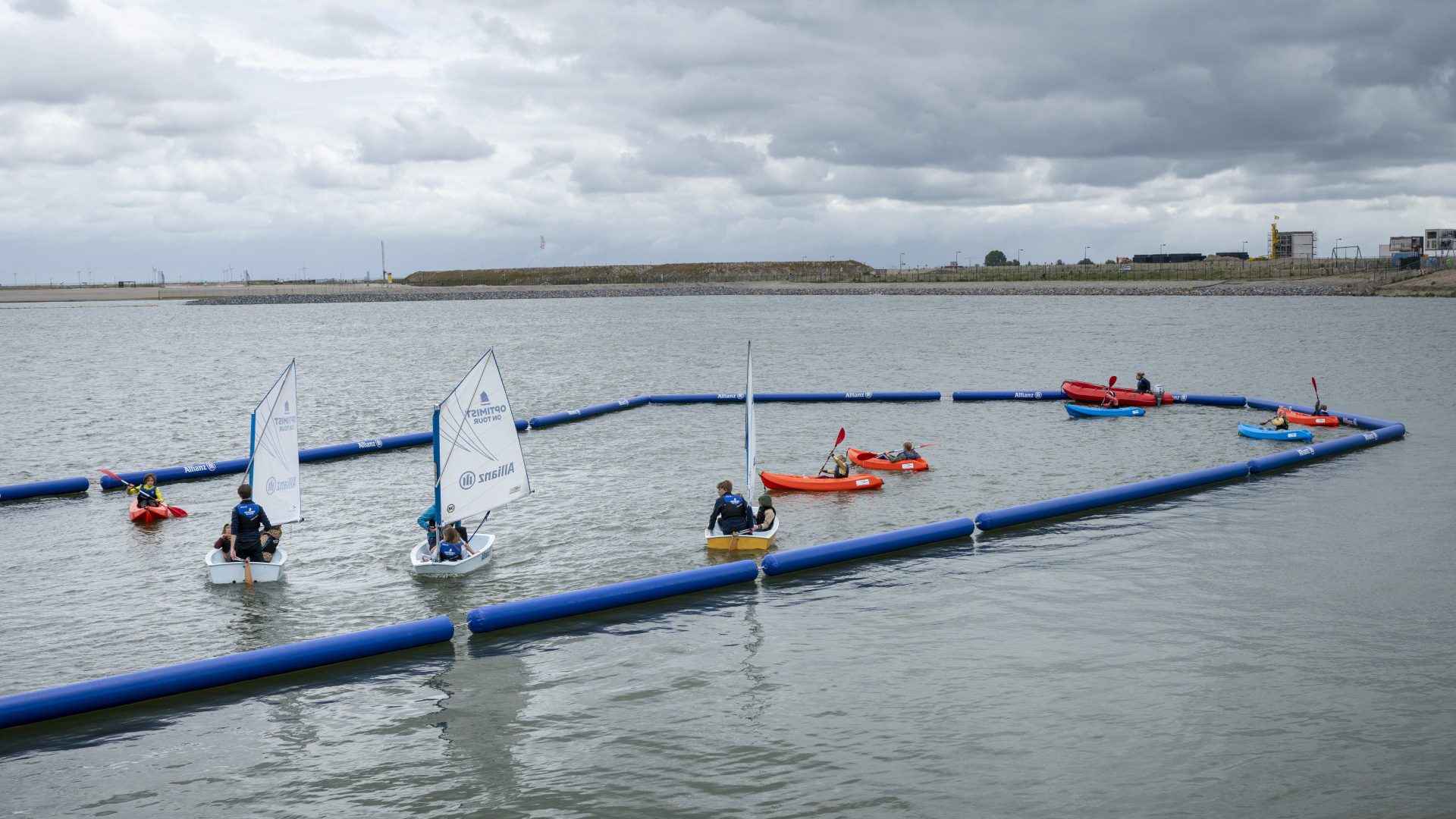 The water around Almere and Lelystad was filled today with water sports enthusiasts. On the Weerwater in the center of Almere children competed in the Optimist on Tour, the kitesurfers and windfoilers started their first races of the Allianz Regatta at the Bataviastrand in Lelystad and around Pampus the sailors could again sail their races in challenging conditions.

The fleet of the Hempel World Cup, part of the Allianz Regatta, brings many international sailors to Almere and Lelystad. For example, there are the Italian 470 sailors Elena Berta and Jacopo Izzo who put down a good second day and are in the lead for now. “Lots of gusts and turning wind,” is Elena’s reaction to today. “The key is to read the wind on the water.” The Italian duo did this well enough today.

Wind plays big factor today
Gusty and turning winds are a factor that all sailors had to deal with today. This is also a main factor at the ILCA6, where we speak to Canadian Maura Dewey. “We are sailing over there, behind the ‘Carnival Island’ (Pampus, ed.), you have a lot of trouble with the trees here which makes the wind extra gusty. But the sailing is good here, it’s good training for me and the forecast for the rest of the week looks good.”

So on that ‘Carnival Island’ Pampus there is a good view of the sailing races. From here today you could also look out on the field of the RS Aero 7, Nacra 17, 49er and 49erFX. The sailing races for the Hempel World Cup will be sailed until Sunday.

Dutch doing well on the foils
Today on the Bataviastrand in Lelystad, the kite and wind foilers started. After a delay of one hour they could also start. The Dutch Annelous Lammerts does very well on the Kitefoil, she wins all four races. In the windfoilers, a Dutchman is also doing well. Max Castelein is in the lead after the first day.

Next generation
Meanwhile, the next generation of water sports enthusiasts is being prepared on the Weerwater in the center of Almere. At Optimist on Tour children are introduced to water sports, where they can go sailing, windsurfing, canoeing and SUPing.

Rixt de Laat, head instructor Optimist on Tour in Almere: “The children are very enthusiastic! And the nice thing is that in the water lab, where the kids can do all kinds of experiments with water, we have two French Wave Makers walking around this week. They brought a package with a miniature city made of blocks. At some point the city will be flooded and the children can prevent this by adding more durable blocks to the city. For example, by replacing a parking space with a piece of grass so that the water can run away. In this way the children become aware of how much impact you can make with a small adjustment.”

Are you between the ages of 8 and 12 and interested in water sports? Untill June 5 between 15:00 18:00 on Almere Weerwater there are still opportunities to register. See Optimist on Tour for more information.